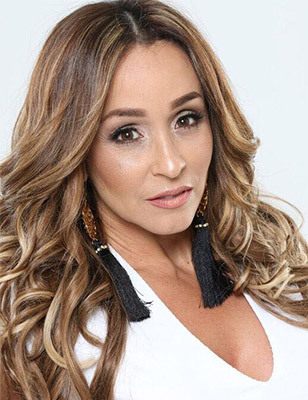 Gisselle: The Queen of the 8th Street Festival

Born in New York, from Puerto Rican parents, Gisselle began her artistic career at an early age. By the age of 15, she was dancing in important events at the Centro de Bellas Artes, the most renowned stage in San Juan, Puerto Rico, at the time. Her dancing moved audiences and landed her spots in the musical, "El diluvio que viene" and soon thereafter she was selected to be a back-up dancer for the world famous Menudo group.

As her dancing career began to flourish, Gisselle leaned more towards exploring her love of creating music. She made her music debut as a member of the group Kaviar, an all-female merengue orchestra, with whom she toured Puerto Rico and quickly made a name for herself. Setting her sights on bigger audiences, she joined Punto G from 1991 to 1993 and had great success in the ballad genre, a style that was quickly growing in popularity worldwide. Her clear voice, her strength, and her charisma on stage led her to win the recognition of the Puerto Rican public, leading to her first album, a solo debut under the BMG label.

In 1995, her first record, produced by Bonny Cepeda achieved great recognition, including "Perfume de mujer en tu camisa" and "Pesadilla", which both went gold and platinum. By later that year she had also won the Paoli, Farándula, and Tu Música awards.

A year later, in 1996, Gisselle managed to take her production "A que regreso" back to the radio and sold more than 200,000 records with her second solo production. She went on to produce more hits, including "I want to be with you" which topped the Billboard Magazine's Latin charts and her duet performance with Sergio Vargas was an instant fan favorite.

She took her music on tour and delighted fans all over again with her great music and charismatic flair, selling out venues and singing in front of over 175,000 people in shows all throughout Puerto Rico, Panama, the Dominican Republic.

By the end of the 1990s, her album "Atada" gained even more notoriety than any of her other albums, thrusting her on the international stage with a Grammy nomination in the brand new merengue category.

Her fans and the press dubbed her the "undisputed Queen of the Bay" and "Queen of the 8th Street Festival", consecrating her as one of the favorites in tropical music.

In the summer of 2000, Giselle surprised everyone with the release of her new musical production, "Voy a enamorarte". This album was produced by renowned ballad artist, Kike Santander. Her song "Júrame", released in merengue and ballad versions, was one of the best-selling songs of the summer in Puerto Rico that year, claiming # 1 in the Latin Billboards and won a Grammy as Song of the Year.

In 2002, she received a third Grammy nomination for her newest album, "8", months before the release of her first-ever Pop album, “En alma, cuerpo y corazón”. With this new sound, her songs were fan favorites, with “Márchate”, “Atada” and “Sin aire” being played frequently on the radio. But her return to merengue was inevitable, and in 2004, the singer resumed the merenguero genre to release a new recording entitled “Contra la marea” under the Universal label.

Since then Gisselle has led advertising campaigns, been featured in dozens of commercials across Latin America, and held lead roles in theatrical performances, gaining her acclaim as the "Actress of the Year" at the Festival de Tercer Amor. She’s currently working on three successful plays and remains very active in what she describes as her passion: music.