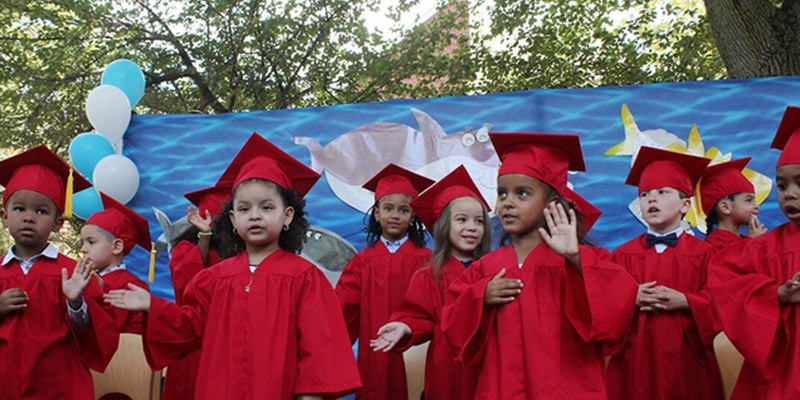 20 Years to Today: The Impact of IBA's Preschool

To honor our 50th anniversary, we’re taking a look back at the history of IBA’s Preschool program! In 1976, a group of local Latino parents came together to present to the Massachusetts State Government the need to provide services to Spanish-speaking families. One of these services included a bilingual preschool for children. The parents’ efforts proved successful, and thus, IBA’s preschool was born. Originally named Escuelita Agüeybaná, our program became the first bilingual (Spanish-English) preschool in Massachusetts.

We spoke to two moms whose children started their education at IBA’s Preschool, and how they felt about their experiences. One of the moms, Brenda Salgado, had two children go through the program almost 20 years ago, and loved that they were able to be immersed in their culture from day one. The other mom, who chose not to give her name, has a daughter who attended the program two years ago, and loved the confidence IBA’s teachers were able to instill in her.

Tell me about your kids.

Brenda: So, my children went to Escuelita Boriken back in early 2000s. They’re now 18 and 20. My experience with Escuelita Boriken was amazing, the staff was very warm and loving, and it felt like a second home to them. I actually was a volunteer! I worked 4 days a week and on Fridays I would volunteer my time and go to the school and be part of the class, and bring activities for the class to join in with my ideas, like cooking. I would do a traditional dish with the class and [with] the permission of the school, and it’s just a way of me giving back and showing my children that I could also help them out and be part of the class and just see how the whole staff works with the children, and I wanted to see firsthand, being a young mom. So it was important fo me to get that feel, what’s the flow in the class like? I enjoyed my volunteer time there very much, I did the whole routine with them, like help set up with the breakfast, because they have a great way of how they teach the children responsibility. And that was very impressive for me, just to sit back at first and just watch them and how they interacted with the kids and how the children responded to the teachers. And additionally, the bilingual aspect to it is amazing. They got to eat our food, our traditional food, as well as our language which I think what was great and very unique with that school.

How important was it that you send your kids to a school with bilingual education?

Brenda: Very important, because I’m Puerto Rican, but I was raised here in Massachusetts, and so Spanish is not my dominant language. English is my dominant language, so it was important that my children go to a bilingual school at an early age, because once they went on to regular education, it was going to be different because they didn’t speak Spanish that well, and I wanted to introduce that to them.

How did you see your kids change, when they started the program versus when they came out, I know that your kids are a lot older now, so how do you feel starting with IBA shaped the people they became?

Brenda: Their curriculum was amazing. Children that were at home and were going to a preschool is very intimidating for toddlers, or young babies. My son, the first of my two children to go to the school, his motor skills weren’t ready for school, so what I loved about Escuelita was they taught them how to even hold a scissor, how to make cuts, how to use a pencil. And every day they had the same routine, and then I got to see them practicing writing their name so by the time they finished that year, they were able to write their name! And I thought they did a really phenomenal job by implementing that early on, like as soon as they started, that day, they had that routine. 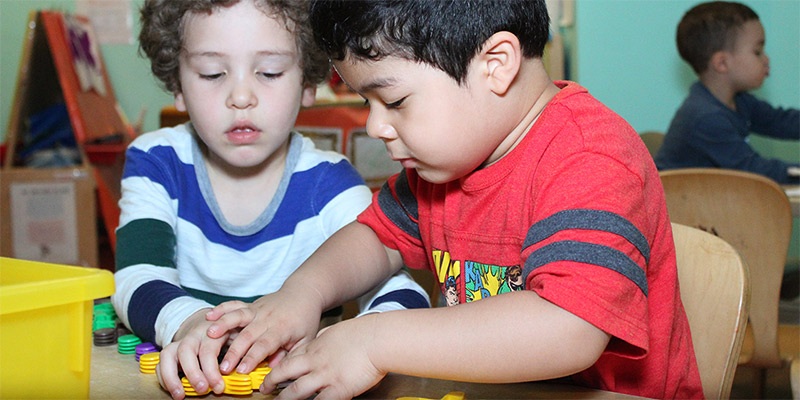 What was the most memorable experience? You were so involved so you really got to experience firsthand the teaching. What was one of your best memories from that experience?

Brenda: How much they love my children. They love them like it was their own, it was like Grandma. And I loved that because they really cared and wanted the children to learn. And that was very important to them, that all the children that graduated and that moved on, were ready, and that was impressive.

Can you tell me about your kids?

Mom 2: I have one daughter, Chanel, who’s five now and graduated from Escuelita two years ago. She’s over at K2 now, was at Escuelita for about two years. And when Chanel first started at Escuelita, she was really shy, she is a really anxious child actually. She worried about not knowing where the bathroom is, for example. And I think Escuelita was really good at treating her like one of their own, and giving her comfort enough to leave behind some of that anxiety.

How important was it for you to put your child into a bilingual program?

Where is she now? What program is she in now?

Mom 2: She’s actually at Rafael Hernandez, which is a dual language school.

This is a question for both of you, actually. How did you first hear about IBA’s preschool program?

Mom 2: I want to say I heard through [Program Manager] Joanna. An aunt of mine is friends with her, and through my aunt and Joanna, I heard about Escuelita.

What sort of qualities do you think have flourished within Chanel since she started?

Mom 2: I would say her writing and her reading, because it started there, she had a base there, and it has flourished since.

That’s awesome. I know they really prioritize writing and reading at the school. How did you hear about IBA’s program?

Brenda: At the time, the school was important to me because it was bilingual, and that it was in the neighborhood that I worked in, so it was easily accessible for me to walk from work to my children. And, coincidentally, my sister at the time had twins, and they were at preschool, already. So we were just in conversation, talking about, “where are your children going to go?” And she goes, “wait, I heard about Escuelita. You know, I’m thinking about applying,” and I go, “oh my god, well, where is it? Tell me about it because I want to go, too,” and that’s how it went. So my sister’s twins went there, as well as my children went there, and it turns out one of my cousins, also, who lived across the street from there, her son went there, so we had a whole community of family in that class. So it kind of got spread through the family on the schooling, how unique it was, and it turns out that other family members’ children went there, so it was very known in our family about how great that school was. So that’s how I found out about it: word of mouth, through family. 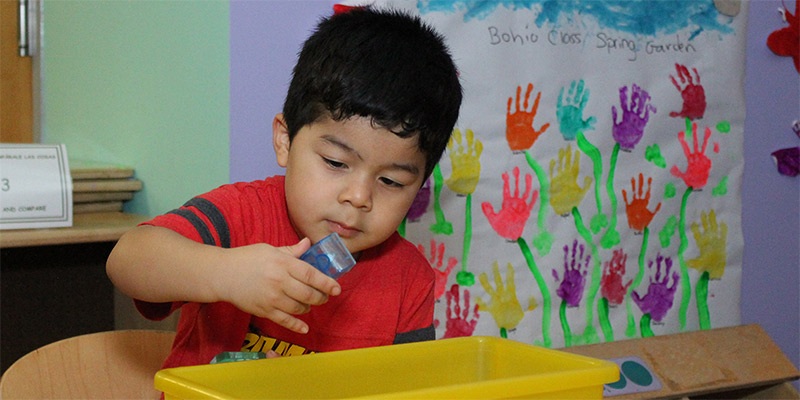 And if you want to tell me about what your kids are doing now, what they’re pursuing, what their interests are now, I’d love to hear that.

Brenda: Oh, wonderful! Well, my son, Bryant, he’s 20, he’s a sophomore in college. He’s at Dean College, he’s a musical theater major. And then my daughter, Natalia, she’s a senior in high school this year, but when she was 17, she wanted to dedicate some time to the National Guard. So she signed up for the National Guard in her junior year, and then this summer she will be doing her military training. So right now, that’s what’s happening, so a lot for my children. I’m very proud of them. But I have to say, my son, when he first went, he was five years old. So he was on the older side for preschoolers, but it was very intimidating for him, he was very much a home child, so going to school for the first time was devastating. And what I loved about Escuelita is that they embraced my son. They hugged him, they made sure he was going to be okay. It took a few weeks for the crying sessions to stop, but I loved that about them. They just embraced him like he was one of their children. And they have little shows for the kids, and they have themes, and they have their songs and their books that they read. It just really stuck with me. Listen, it’s 20 years later and I’m still talking about it. I think it’s impressive how they run their curriculum there. It’s important that they embrace culture, and they do. And they have so much to offer to those children, and I think that most daycares wouldn’t offer our cuisine, their food, they cook it there in their kitchen. It was just amazing. So, my kids are great now, and they still remember Escuelita now. I told my son I was doing this interview and he goes, “oh, I want to go back and visit!” and see if some of the teachers are still there. And he won’t necessarily look exactly the same from 5 to 20, but he loved his time there, and he still remembers it.

That’s great. I think that’s so funny with the split interests: one’s in the military, one’s doing musical theater.

Brenda: Yeah, my children are very unique. My daughter, I remember, with one of the teachers, they would be like, “is your daughter always this quiet? Because she’s always so quiet, she talks so softly, she doesn’t really speak out loud,” and they were working on that. They wanted to know, what’s her personality like? I’m like, that’s how her personality is at home, she’s very quiet. But her voice is definitely opening up now, she’s a totally different kid now. What I loved [about Escuelita] is that they paid attention to small detail, and they were very involved with the parents. You know, the drop off, the pickup, the daily how-they’re-doing, and they helped me realize that my daughter was really that quiet. 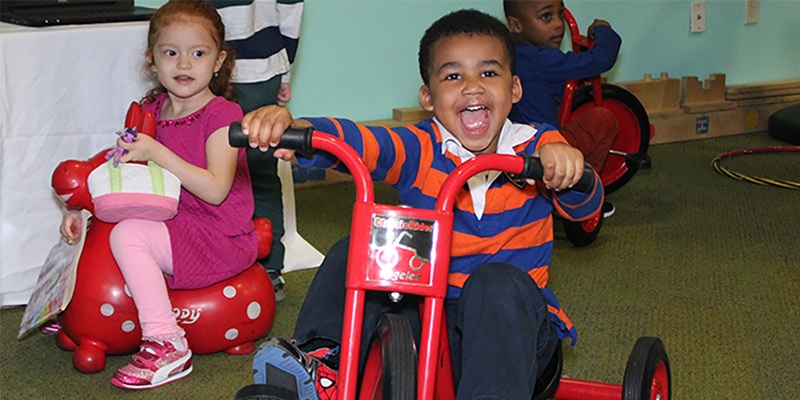 I would love to hear from you, the things that you thought were really outstanding about the program.

Mom 2: Definitely, I think everything from start to finish, the curriculum, the reading, the shows, even the summer BBQ’s that they do and the playground, even that, they went a step beyond what they should be doing, you know? To make it special for the kids, and that definitely is amazing.

Brenda: And the parent involvement, as well. They encourage parent involvement. They honestly opened the door for me. I said, “can I come and help?” and they were like, “sure!” So I thought they wouldn’t allow parents to be there, obviously not every parent could be in the classroom, but the fact that they allowed me to come and be part of the class routine and things, was really nice. That they opened that up to me. Because that experience is really precious to me.

We’re so glad parents love their experience with our preschool, with 100% of them surveyed in 2017 saying they would refer other families to our program. As the first bilingual preschool in Massachusetts, we understand the importance of multicultural classrooms and the impact they can have on a child's life. We are proud to have a full day, year-round program, licensed by the Department of Early Education and Care and nationally accredited by the National Association for the Education of Young Children (NAEYC) for our community.