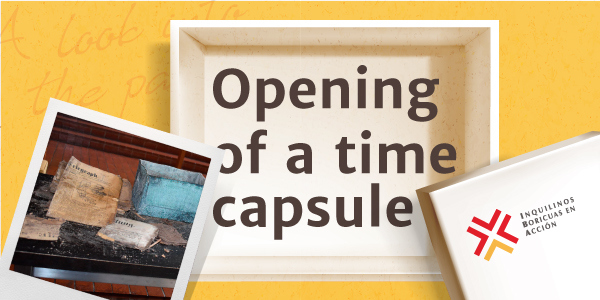 We opened the mystery box!

Earlier this year, during the demolishing of Villa Victoria Center for the Arts, the construction team found a box under the foundation of the former St. Paul’s (Zion’s) Evangelical Lutheran Church. The mystery box was given to the First Episcopal Church of Boston since—before us— they were the previous owners of that building.

“We felt it was important for us to share it with the church to preserve history,” IBA CEO Vanessa Calderón-Rosado said.

“We decided that it would be great to do this together since it’s sort of a connecting point in our mutual paths,” Rev. James Hopkins said.

Curiosity about the contents of this 123-year-old time capsule caught the attention of many around Boston. After carefully opening the box, Rev. James Hopkins lifted out a bundle of papers that turned out to be English and German-language newspapers from 1898. We also found a few old coins from back then, the church’s historical records, and a barely-legible book of hymns, damaged by dirt and time.

“It was very emotional to see the history because they put this box in the building thinking that at some point in 120-something years after someone is going to find it,” IBA COO Mayra Negrón-Roche said.

The items will be on view at the First Lutheran Church of Boston for anyone who might be interested in taking a look back in history.