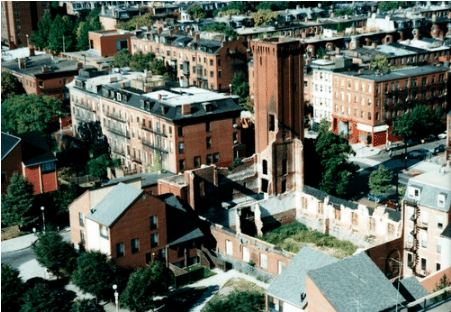 A Look Back at Our Foundation: The Conditions that Gave Rise to IBA

“It was a long struggle to make the residents believe that, if we united ourselves, nobody could take our rights for better housing and better living standards”

The South End of today looks strikingly different than it did 50 years ago. High-end retail and polished townhouses line the sidewalks, with Villa Victoria seamlessly forming the heart of the community and paying homage to the neighborhood’s deep roots. As we celebrate our 50th Anniversary and reflect upon our history, the question of “how” and “why” IBA was formed is a story worth telling.

From the 1920s through the 1950s, Greater Boston experienced little urban development and improvement. Stemming from different waves of migration, the Immigration Act of 1924 that limited immigration in the United States and new zoning restrictions, ethnic communities increasingly defined the neighborhoods in which they lived, while manufacturing, commerce and housing development plummeted. The economic condition of the city further deteriorated after World War II, as many returning veterans and their families settled in the suburbs and no longer contributed to Boston’s tax base (From Urban Renewal to Affordable Housing Production System).

Due to economic decline, a lack of government funds available for public services and negligent landlords, living conditions in the city were unsafe. According to our CEO Vanessa Calderon-Rosado, long-term residents speak of “subpar heating in the winter” and “buildings boarded up and destroyed by arsonists,” while other testimonies report of rat infestation and deteriorating infrastructure. In 1950, the city of Boston began to implement urban renewal initiatives to redevelop specific neighborhoods considered to be run down, oftentimes utilizing disruptive methods such as mass eviction and demolition to rebuild.

In 1967, the city proposed redeveloping Parcel 19, a residential site in the South End’s Puerto Rican community. Staunchly resisting the plan, Puerto Rican activists gathered and formed the Emergency Tenants Council – a community development corporation that was later renamed into what we are now, IBA – Inquilinos Boricuas en Acción, in 1968.

The Emergency Tenants Council hired architect John Sharratt with the goal of designing an urban plan that could viably oppose the city’s urban renewal proposition. During a history forum we held this April, Sharratt explained the process of designing an alternative plan:

“[The residents] lived with color and wanted the roofs to look like their…houses in Puerto Rico. So, we kept the front steps and the brick mostly in respect to the South End and then it became Puerto Rico as it…grew up. They were strong and they knew what they wanted…and were not afraid to demonstrate and fight for it.”

Through widespread organizing of demonstrations, which resulted in the renowned protest cry “we shall not move from Parcel 19,” and voter registration efforts, the Emergency Tenants Council won the rights to develop Parcel 19, now known as Villa Victoria. Since this monumental victory, IBA has built an affordable housing portfolio of 521 units and continues to offer exceptional resident services and educational, youth, arts, recreational and economic empowerment programming.

The resiliency, tenacity and dedication demonstrated by our founders inspire our mission to provide residents with affordable, safe housing and the services they need to feel empowered. As we look back, we also look ahead to the decades to come and will continue to support community development that is egalitarian, accessible and just.