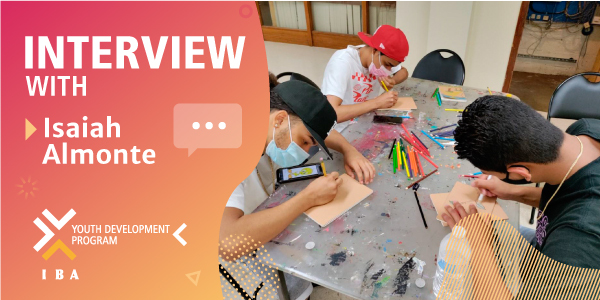 Empowering the Future of Boston

In 2016, IBA’s Youth Development Program (YDP) won the National Arts and Humanities Youth Program Award. Awarded by former First Lady Michelle Obama, this award was the nation’s highest honor for after-school and out-of-school-time arts and humanities programs that focused on the needs and talents of young people.

But what does YDP do, exactly, that’s so impressive? A great way to show you the impact that YDP has on IBA’s affordable housing community is to feature the programming experience of YDP participant Isaiah Almonte, who enrolled in three Academic Year and three Summer programming cycles.

Isaiah joined YDP during his Junior year of high school. He was looking to help his parents financially by signing up for a part-time job near his home, and YDP’s paid Peer Leader opportunity intrigued him. Once he learned more about the program, Isaiah was even more interested in joining: like many young men in Boston, was looking to find a positive and safe space outside of school in which he could find community and be productive. With its employment-based program, centered on arts education, that fosters meaningful peer and mentor relationships while preparing participants for school and life success, YDP was just what Isaiah was looking for.

As a YDP participant, Isaiah received many different forms of support. One key way in which YDP supported Isaiah was through its Academic Support programming. YDP staff met weekly with Isaiah during one-on-one check-ins, during which he discussed challenges he was facing at school and came up with a game plan for staying on track with his academic goals. YDP staff also helped him discover opportunities for higher education and supported him throughout the college application process. These meetings and Isaiah’s hard work definitely paid off: Isaiah graduated from high school last year, and is now about to start classes at Bunker Hill Community College.

As an inspiring rapper and musician, Isaiah cultivated his creative writing skills by participating in the Youth Development Program’s Art Enrichment workshops. During his time with YDP, he helped create a community mural, was featured in community showcases, performed music in front of a crowd of community members, and more. He even shared his poetry with IBA funders at a citywide event; you can check out Isaiah’s poetry here.

YDP’s staff and all of IBA are so proud of Isaiah’s hard work throughout his six programming cycles with YDP, and can’t wait to see what he accomplishes next.

If you want to support other youth like Isaiah, please consider donating to YDP here. From all of us at IBA, and especially from YDP staff and participants, thank you!