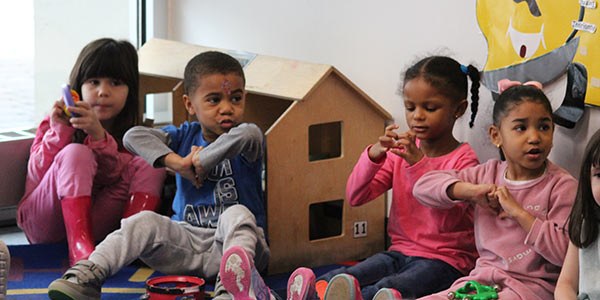 They Have Your Back: Sitting Down With A Preschool Mom

We recently sat down with the Sarah, the mother of one our preschoolers, to talk about IBA's preschool. Her 3-year-old son Eric has been in IBA's Preschool for the last 9 months, and according to Sarah, has grown immeasurably.

Q: How did you hear about IBA’s preschool?

Sarah: I was having dinner with his dad in the area, and we just walked in, which is how we found this little school. Also through family and friends highly recommending it. Not many schools are bilingual, so I checked it out! I read up on it, I found some info through friends, and I came in and spoke to Joanna and everything has been good.

Q: What do you think the benefits of the multicultural preschool can be?

Q: What is your favorite part about the preschool?

Sarah: My favorite part of the preschool would be how happy he’s been with his teachers, he loves his teachers. He loves to speak Spanish, it’s like a whole new planet for him, a whole new language. It’s also very flexible, it’s very convenient from where I live and where I work so it’s been great. They communicate with me throughout the entire day, so it’s not about just dropping your kids off, you’ll know what they’re doing all day. They communicate with you; they’ll call you, you’ll call them, stop by anytime and make sure your son or daughter is doing okay.

Q: What impact has IBA had on your child? Have you seen any improvements?

Sarah: He’s happier. In the beginning we were at a shelter, and we weren’t doing too good. He was at a different school in Jamaica Plain, and he wasn’t happy. He felt like an outcast, maybe because he was the only Hispanic kid there. At IBA's Preschool, he’s in a diverse environment. He knows there are all different kids with all different languages and backgrounds. So it has changed him to know, for example, his best friend, Louis, is white so he knows that. He knows that his other female friend is African American. So he appreciates the differences. He has learned so many Spanish songs, he learned his ABC’s here, so it has made him more open to know there are different cultures, not just us Hispanic people or white people.

Also he’s talking more; at the other school he wasn’t, even at home he was quiet. He knows a lot of songs, his memory’s getting better. Potty training is good and very important for him now. He’s also starting to write and he knows his colors, which is kind of impressive! If I would have not changed his school, I think he would’ve been just stuck, being a little bit mute, but here, he’s speaking. They’ve been helping him, now he knows how to switch between English and Spanish, which a 3 year old wouldn’t normally know. But here, one thing I think I was more concerned with was his speech, but within 2 weeks of being here, his speech had gotten better. That was back in October of last year, and now he won’t be quiet! I think they’ve really helped him out.

Q: Would you recommend the program to other parents?

Sarah: Yeah, I would highly recommend it, because it’s a neighborhood school. It’s very convenient, there’s the bus, down the street you’ve got the trains, all the local shops and restaurants. It’s just beautiful walking down Washington and Tremont Streets and it’s safe. I walk here after 5 o’clock, so it’s very convenient. If you’re a family, if you’re a single parent, they work with you. There’s tons of programs, tons of help, especially for a single parent like myself. They have your back and they will help you.