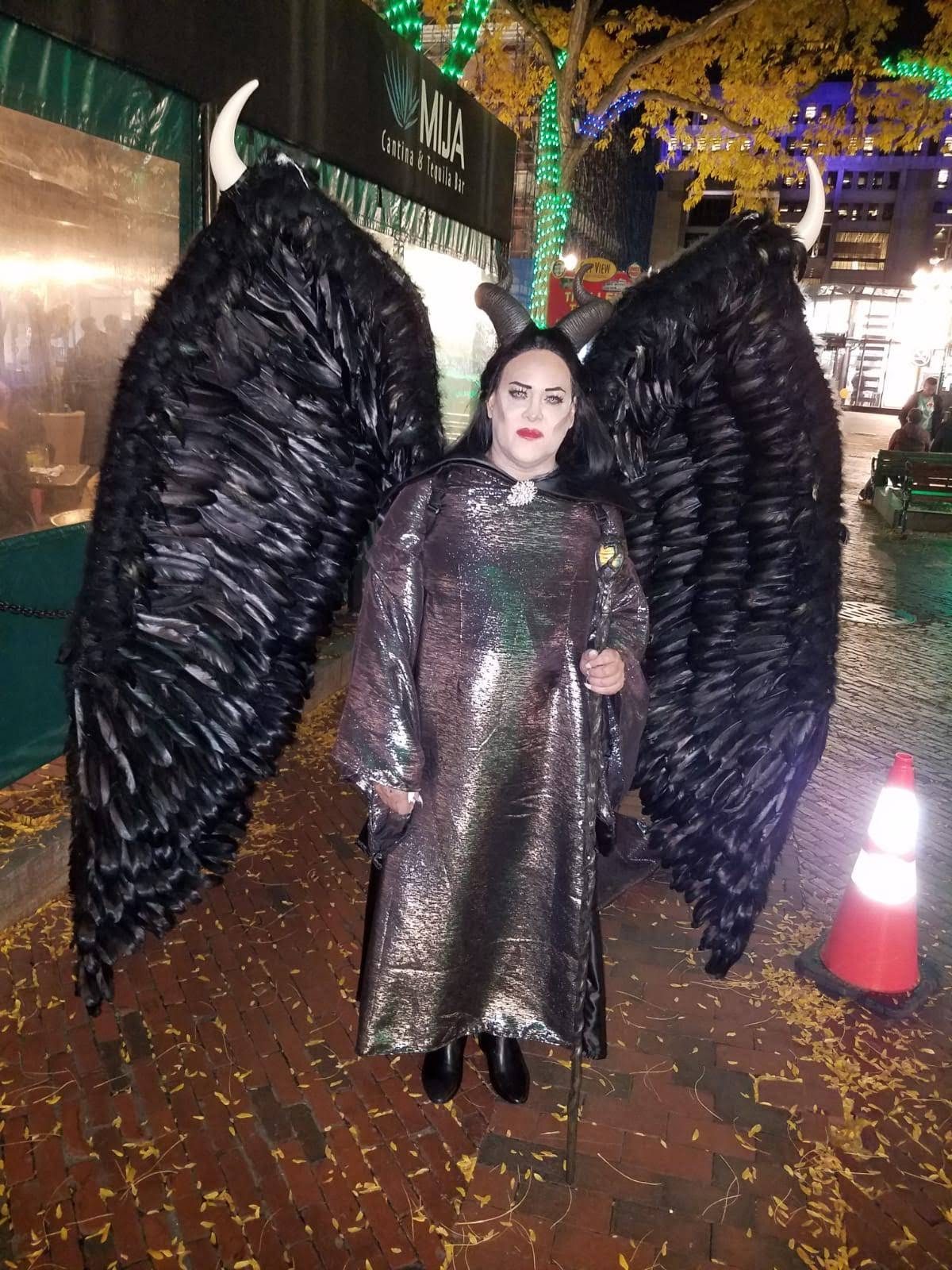 Heroes in our community come in all shapes and sizes… and costumes! This past Halloween is no exception, especially for one Villa Victoria resident, Hector Colon who makes it his mission to give back in a big way. We sat down with him recently for an interview to learn more about how this Halloween giving tradition started.

Since I’ve lived in Puerto Rico, I’ve always created elaborate Halloween costumes to get donations for charity. So, this year, because the movie maleficent was coming out, I decided to have that as the theme of my costume. The idea was that I would walk around the city with feathers wrapped around the golden lace, and use some of these same feathers as the wings for my costume. And, of course, this drew lots of attention. But, I used this opportunity to talk to people and ask them to pledge $25 a month to Saint Jude Children’s Hospital. If they agreed to pledge, then I would give them a feather.

On the day of the Halloween costume contest, I went to Quincy Market and I walked around asking people to pledge. My goal was to get at 300 people to agree to pledge $25 a month to St. Jude. And, the best part is, I was able to reach my goal! So, if you do the math this would mean that I was able to have people pledged around $90,000 to St. Jude’s Children’s Hospital in one year!

I chose St. Jude Children’s Hospital because I am a cancer survivor and have beat cancer already five times since I was a child. I feel a strong connection to help these children and I want to give them hope and support. Hopefully one day through all of our donations there will be enough research to be able to eradicate cancer for good.

How did you make your costume? Do you have any special costume design training?

I have an inventive mind, that’s what my father always said. I think I inherited his engineering skills and my mother’s smarts. My father was an engineer and he was always building things and I like to tinker with things too, so a lot of what I do with my costumes is a bit of trial and error. For this year’s costume, it took me 37 days total, with about 10 hours of work between the research, the design, the construction, and the production of the costume. One of the biggest challenges was how to make the wings open and close. To get this to work, I came up with an idea to embed a small motor inside of the wings, so they look like they open effortlessly. Another big challenge was how to make the wings light enough that I could wear them without feeling weighed down. When it was all said and done, they were about 30 pounds and you can imagine that takes a toll on your body when you wear them for up to seven hours a day! But, the wings were 16 feet wide when they open fully and are made from 16 feet of PVC pipes, 32 wooden rods, 750 feet of wiring, 10 yards of cloth, 2353 natural feathers, a 12V battery, and a motor to open and close them. I also had a remote control on one of my hands to operate the mechanism and I wore a wig that I had from years ago, when I lost all of my hair due to cancer.

To get the design just right, I watched Maleficent over and over again to analyze every angle and to know exactly how the costume should be built. It was a long road to get to the final design. I actually almost quit because the wings kept breaking under the weight.

How did people react to your costume?

The reaction of the people on the street was amazing! I was walking from the T-stop and it took me an hour and a half because I got stopped so many times with people asking for pictures. I always love to see the shocked and surprised looks on everyone’s faces.

After walking around in Quincy Market one of the organizers came up to me and told me that I had just won the costume contest. He gave me an envelope with $500 in cash and of course, I’ll be donating that to St. Jude also.

To get more donations, I also set up a Facebook page called Maleficent Paramos with a goal of raising at least $30,000. With the money, if I am able to raise it, I’ll use $25,000 to give to the hospital and $5000 for me to travel in person to personally give them the money and to donate the wings too.

What are your plans for next year?

I would love to keep doing this every year, and in 2020, I would love to do it much bigger and raise money for many more organizations. I already have an idea in mind for next year’s costume, but it’s a secret! What I can tell you right now is… I’m not going to be wearing makeup but I’m going to be inside of this costume.

Tell us about your experience as a resident in Villa Victoria.

I’ve shared some great experiences with the residents that have been really enriching. I don’t really get out much because I have a health condition, but I have a very tranquil life at Villa Victoria.